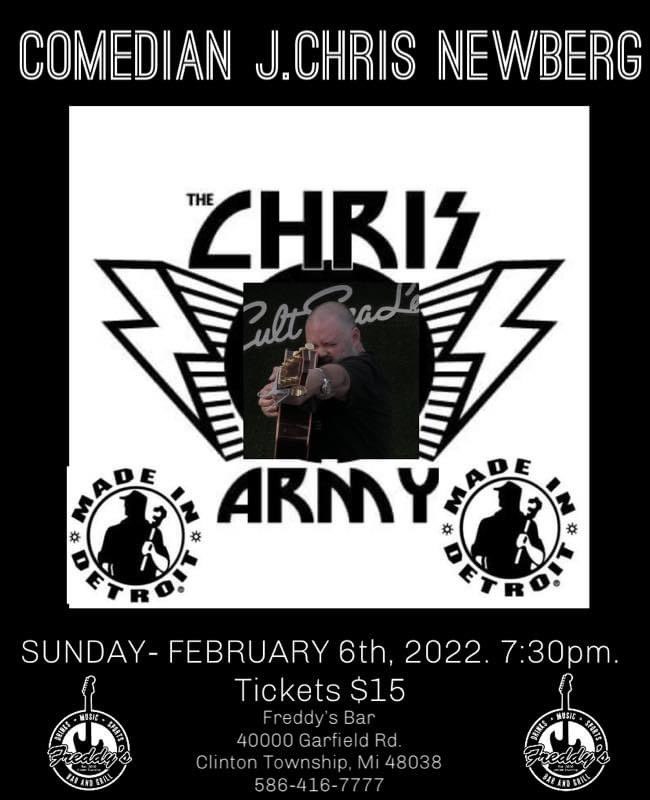 He’s also been a writer for Fox Sports, E!, Facebook Watch, and many other outlets, while his first host-producing stint was for the Game Show Networks “Idiotest”, which led to similar duties on “Emogenius”, “Put Your Money Where Your Mouth Is”, and the Jaime Foxx- Hosted “Beat Shazam”. Currently, Chris produced ABC’s the “ Chase”. Be sure to check out Chris’ award winning Podcast “Heroine Has A Great Publicist” find it anywhere you Pod. Join us for a brand new hour of laughs with J.Chris!

Charles Hill is an automotive worker by day and at night he’s a guitar playing Comedian who blends jokes and music with his own unique style and wit. He is the host of the popular Tuesday night open mic at the “Gratiot Pub”. Be sure to look for Charles at Clubs all over Michigan.

For over 15 years, Paul Pipitone’s been bringing big-time laughs to clubs all over Michigan. He also hosts the long-time “New Way” Bar (open-mic) in Ferndale followed by the New Way “Wrap Up” Podcast with Comedian Dan Grinnell every Monday night.