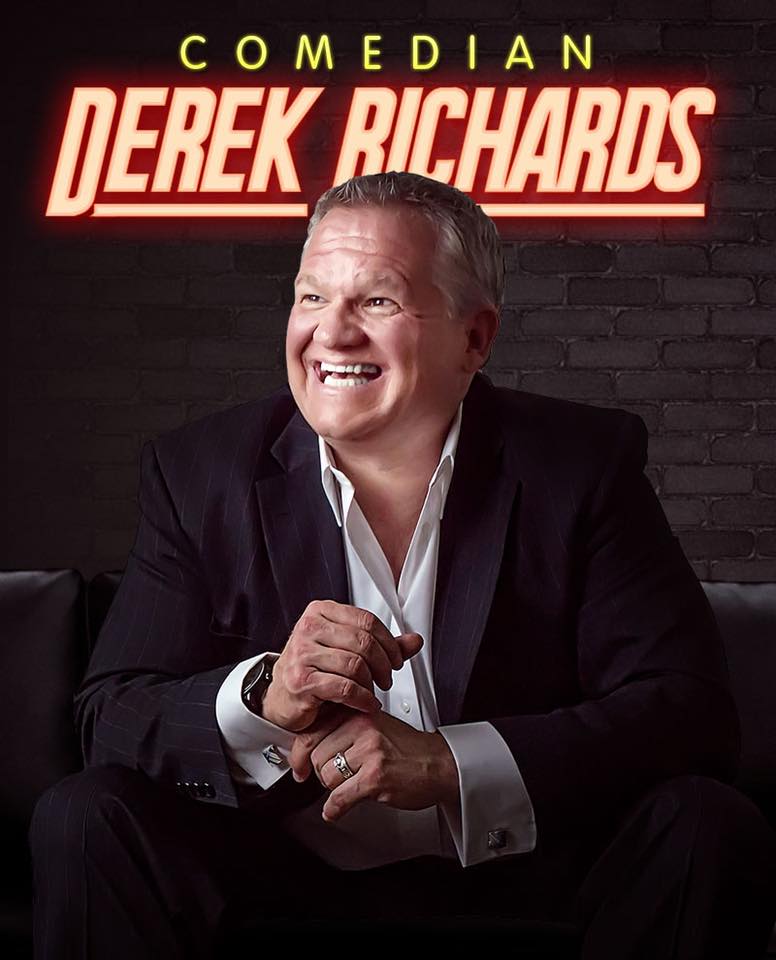 Freddy’s “Sunday Night Live” Comedy Showcase Presents:
An evening with Comedian Derek Richards wsg
Bill Morrison. Hosted by Tyler Nissen.
Your Emcee: COMEDIAN TYLER NISSEN.
Tyler Nissen has been performing Stand-up comedy and storytelling in the Michigan circuit for over 4 years now. He was a finalist in the “Jumpstart Your Comedy Career” contest at Joey’s Comedy Club, a finalist in the Moth’s Detroit “StorySlam” competition, and recently a semi-finalist in Mark Ridley’s Comedy Castle’s “Detroit to LA” comedy competition!
Tyler’s comedy consists of punch-filled observations on the norms of society, joined with a touch of humility to let the audience in on his own little world. Come join Tyler’s world for the entertainment of a lifetime! Or at least 15 minutes of it.
Your Feature: COMEDIAN BILL MORRISON
Bill Morrison was born and raised in the Detroit area. Bills humor comes from his experiences of a husband and father and his dealings with the trials and tribulations of everyday life.
Bill’s lifetime of bottled up frustrations come out in a torrent of emotions that allows others to release their angst, vicariously through him. Bill is no doctor but laughing along with him might just make your day:)
He has performed at One Night Stans Comedy Club in Waterford and Mark Ridley’s Comedy Castle in Royal Oak. Bill has also performed at various clubs in Las Vegas. Get ready for your Uncle Bill! Ya just might learn something!
Your Headliner: COMEDIAN DEREK RICHARDS
A regular on the Las Vegas strip, Derek’s act is fast, fresh, and at times fanatical. He brings the funny with tales of his blue-collar upbringing, his divorce, the Holidays, and his child-free existence.
A veteran of several USO tours, Richards was chosen as one of the first performers at Guantanamo Bay, Cuba after the base began guarding jailed Al-Qaida terrorists. The Comedy tour earned Richards national coverage in Newsweek.
He has also performed at U.S base camps in Iraq, Afghanistan, and more than 15 countries.
You can hear him on the air via SiriusXM Satellite Radio Network, and on the nationally syndicated, Bob & Tom Radio Show with Bob and Sheri. He was also featured on the Weather Channel’s Top 10.
On the concert stage, he has been the opening act for Motown legends;) The Temptations, and The Four Tops. His third Comedy album, 60MPH School Zone, garnered honorable mention accolades in the International Songwriting Competition in the spoken word category.
Be sure to get your copy at shows, iTunes, and at derekrichards.com. Hit the site to hear a sample of why this lunatic leaves every audience howling, and hoping he’ll be back. Don’t miss this long-time Detroit original!
Doors: 6:30pm
Showtime: 7:30pm
$15 advance tickets are available by calling Freddy’s at 585-416-7777 for reservations. Tickets are also available at the door for $20
$20 Door.
Freddy’s is known for great food, drink, the very Best in Live Entertainment, and awesome waitstaff! Have dinner before, dinner, or after the show!
Freddy’s Bar & Grill
40000 Garfield Rd.
Clinton Township, Mi 48038
1-586-416-7777